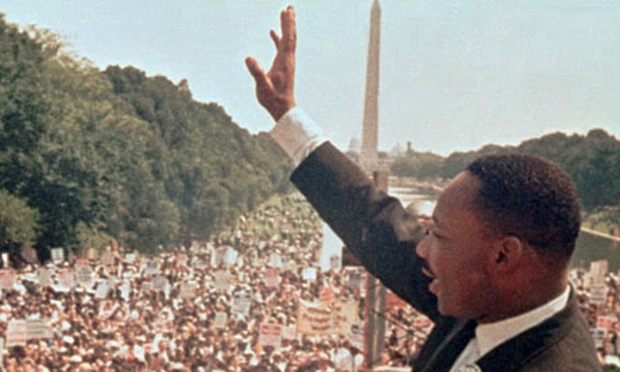 The fourth of July and my American son

During my first week in the US I went to the Mall in Washington, DC, for the fourth of July. With flags billowing and picnic baskets disgorging, I remember hearing John Wayne’s voice over a loudspeaker, extolling the nation’s innate virtues, followed by a huge cheer. Within half an hour, he was joined by some Martin Luther King championing, once again greeted by applause.

I admit I was confused. Which America were they rooting for? The gun-toting, swashbuckling land of the settler or the non-violent home to the struggle for equality? Or was there more than one?

This is what I’ve always found both impressive and enraging about American patriotism. I love its flexibility – the notion that however problematic, majorities of every race, ethnicity and religion found a place for themselves in the national story. The trouble is that story all too often slips from a celebration of shared citizenship to a proclamation of genius – as though being an American is in itself a higher form of human being.

This has always struck me as a virus that can find its home in any political body. For many, being American is understood not as a starting point from which a greater understanding of the world might be achieved but an end point, after which the rest of the world ceases to exist. Badges and placards announcing that "Peace is an American value" or that the war in Iraq was somehow "un-American" make me every bit as uncomfortable as the more traditional bellicose and belligerent jingoism. In my experience, sentences that start: "As an American…" rarely end well.

In Britain, patriotism is an altogether rather embarrassing and more rigid affair. Generally speaking, flags and anthems are for sporting events, royal weddings, jubilees and nationalists – all of which in some way hanker for former glory. I don’t begrudge the joy of thousands who braved the rain to watch the flotilla of boats float along the Thames last month but I don’t share it and have never found a way to relate to it. British patriotism, it seems, exists not so much as love for your country but for its past. We are great, goes the logic, because we were better. Hence the football chant when Britain plays Germany – "two world wars and one world cup" – reaching back almost 50 years for some sense of cultural superiority.

As such, British identity – and this goes for most other European national identities – has long suffered from the illusion not of genius going forward but purity going backwards. Being British, in the minds of many, is not a work in progress but an artefact inherited from the past. As a black Briton whose parents came to the UK from Barbados in the early 1960s, this is the kind of nation-love I can do without. It harks back to a time before I existed and effectively celebrates it because I wasn’t there.

Britain doesn’t have an Independence Day; it simply looks askance as most of the rest of the world celebrates independence from it.

For me, growing up, it felt that there was no way to become British. It was an identity you either accepted wholesale or did without. I did without.

So I have long looked upon the fourth of July with a twinge of envy. If there must be nation states then I would rather there be a national identity I can relate to. If I’m going to pay taxes, I might as well get the badge.

But more recently, I have come to relate to it with more than just anthropological interest. For I now have an American son. Over the five years since he was born I have made my peace with the fact that I will eventually lose him to a vaguely familiar world of little league, dental braces and phonetic spelling. But the notion that I may also have to give him up to the unwieldy beast of American identity is far more tricky.

Not only have I never been a patriot. Before I came to the US, I’d actively avoided them. So how to make sense of the fact that I might be raising one?

For while I understand the appeal of Independence Day, there has long been tension between black America and American patriotism. In his famous speech, ‘What to the Slave is the Fourth of July?’ in 1852, the abolitionist Frederick Douglass explained to his mostly white audience: "This Fourth of July is yours, not mine. You may rejoice, I must mourn. To drag a man in fetters into the grand illuminated temple of liberty, and call upon him to join you in joyous anthems, were inhuman mockery and sacrilegious irony… What, to the American slave, is your Fourth of July? I answer: a day that reveals to him, more than all other days in the year, the gross injustice and cruelty to which he is the constant victim."

But I have also seen that while African Americans may be far less prone to patriotism than most other Americans, and whatever scepticism may exist, they are far more patriotic than any other black minority I have ever seen and, I would argue, far more patriotic than white Britons. Just as Martin Luther King’s dream was "deeply rooted in the American dream", so the African American challenge to the national polity has long been for it to live up to its promise rather than to live down its past.

So when the fireworks are set off and the anthem is sung, do I tell my son to do like his peers and put his hand on his heart and sing along? When the flags are handed out, will I encourage him to take one? When he asks to hang one from the front door will I wince?

Or will I just be relieved that – unlike me – he has never had to experience the automatic dislocation between race and place, in the knowledge that none will see any incongruity between the colour of his skin and the crest on his passport? Given that most Americans of his generation are not white, he’ll grow up in a country where minority is a purely political designation, not a demographic one. True, as a black boy, his odds of going to prison will be higher than those of his going to university. But the bottom line is that whatever he thinks of America or being an American, he will never feel like a guest in his own home.

He will never be in any doubt that he is American. Nor will other Americans. And that’s saying something.


This article was published on the website of The Guardian on July 4, 2012; guardian.co.uk