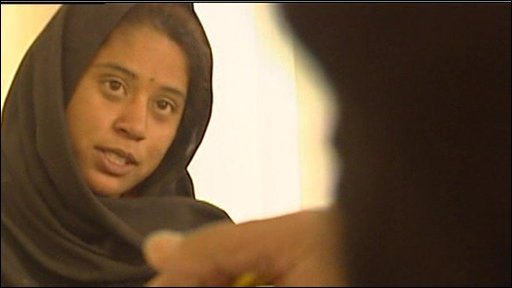 It is a matter of great national pride when your country tops headlines in the international news media. But Pakistanis only seem to make the news for actions that leave their compatriots bowing down their heads in utter shame and disappointment. Ajmal Kasab and Faisal Shahzad, for instance, have truly disgraced the country and it remains a sad reality that we don’t get to hear stories of Pakistanis who show courage and determination in times of distress.

Thankfully, an article published by the BBC is a rare exception that deserves to be shared with the world and especially with the Pakistani youth who are discontented with the way their country is portrayed abroad.

The article tells the story of Meena, a young girl from Pakistan whose own brother and father beat her because they wanted her to be a suicide bomber. The article claims that there is no proof that her account is accurate but the police consider it crucial information in the fight against terrorism.

Meena is only 13 years old and comes from a rural, uneducated background. She miraculously managed to escape the nightmare that her pro-Taliban brother and father made her go through every day. They wanted her to stay in the confines of their home and obey their every order. Worse, they threatened to mutilate her if she went against their word.

Meena describes the heinous activities of her brother to help the Taliban carry out terrorist acts throughout Pakistan and Afghanistan. She also recalls the horrific story of her younger sister whose youth and innocence were snatched away when her brother forced her to become a suicide bomber. It was heartbreaking to read how the wailing protests of her mother fell on deaf ears as her sister was taken away in a car with the burden of not only the bomb that was attached to her tiny frame but also of the gruesome mission looming ahead of her.

Fortunately, Meena managed to escape from her traumatic life when one day she followed a pet goat to a nearby stream just when a helicopter gunship attacked her house and turned it into rubble right in front of her eyes. Uncertain of the fate of her family members, she kept on walking until she reached a nearby town.

Her story is inspiring, if not unusual. There are probably hundreds of girls like her who go through such nightmares every single day. Anne Frank’s story of courage and motivation in the face of adversity may have inspired many but, unfortunately, we rarely get the opportunity to hear other such life stories. The reality is that there are far too many Anne Franks living a life of obscurity in our world today and each and every one of their stories would be a source of inspiration for us.

Meena’s story deserves our attention not because it is unique but because of her determination and courage to come forward and make her experience public. I admire her for taking a bold stand against the Taliban and having the audacity to question their motives. Her doubts about the Taliban might not impress us but we have to understand the background that she comes from: the men in her family did their best to brainwash her and make her believe that suicide bombing is an act pleasing to god.

Unlike too many other young Pakistanis, Meena made the effort to think rationally despite her lack of education and exposure to the world. She could easily have fallen through the cracks and have given in to her brother’s ideology. She could have been any one of those nameless suicide bombers who blow themselves up in the name of god. But she broke through that false ideology. She had faith in god’s message of peace and tolerance and in the real meaning of jihad.

Meena has certainly fulfilled her duty as a Pakistani and in doing so she gives us the conviction to do the same. She wasn’t bestowed with luxuries or even a supportive family but she had a strong faith and character that kept her going despite her traumatic life. We should take a page from Meena’s book and harness our education and achievements to promote a positive image of Pakistan and to make our voices heard.

It is the responsibility of each and every Pakistani individual to make the most of his or her life to improve the country’s increasingly tattered image. We can do it by the power of our pen and the impact of our words; yes, this is our jihad and we can do it without guns and bombs.