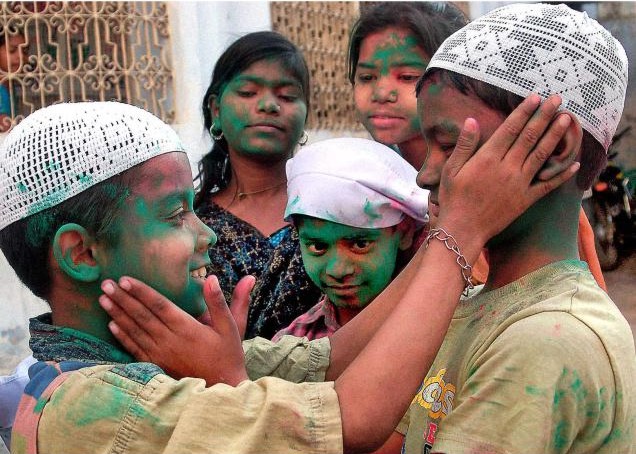 Women and men across India, from across communities and castes who upheld the Indian Constitutional Ethos

These are just a few examples of countless such reported across the length and the breadth of the country in the past three months of 2015 alone. Each finds pride of place in some sections of our newspapers and we at www.sabrangindia.in, committed to strengthening the Indian Constitutional vision, map these for you every day. On https://peacemap.in/  This is a unique collective effort that has constant pride of place on our portal, top right hand side on https://sabrangindia.in/  Click and you will see our efforts at Peace Mapping: we Map efforts at promoting harmony and Map those that are exacerbating Conflict. In the sections on Structured Conflict we have sections on Communal, Caste, Gendered, Ethnic Violence and have also included sections that show societal or structured violence: Displacement/Ghettoisation, Unconstitutional State Actions, Inflammatory Speeches/Writings, Visits/Meetings of Political Leaders, Provocative Programmes, Rumour Mongering.

It is our Categorisation of Peacemakers on  https://peacemap.in/that has generated this rich data. 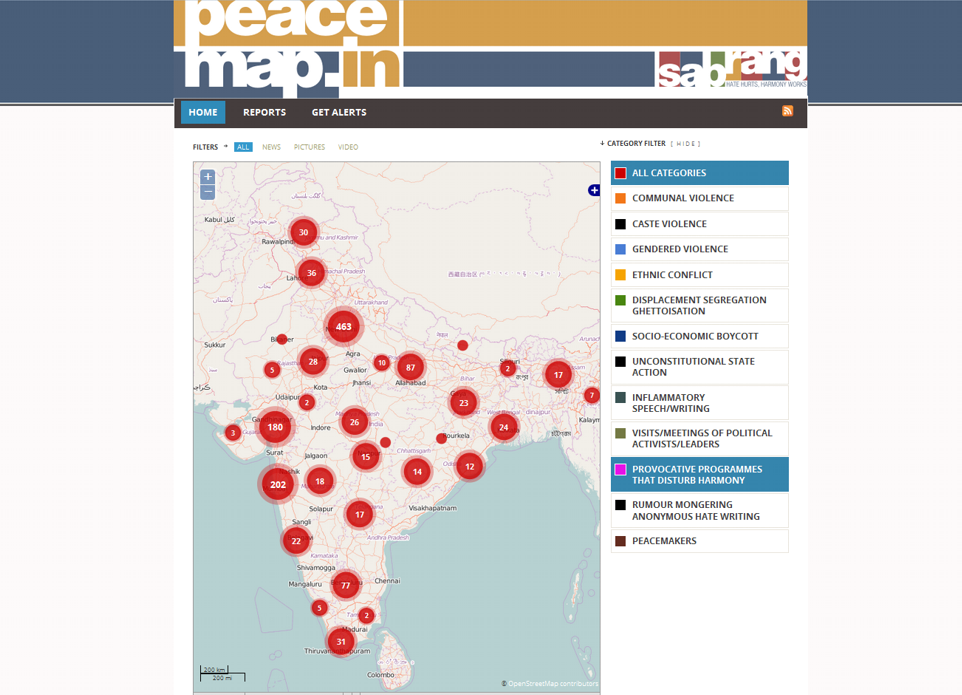 So in the last month of the year gone by, 2015,  as Chennai in the south was devastated by floods and tragedy stalked the streets, on December 8, The Hindu reported that volunteers of the Muslim social organisation were quietly cleaning temples, along with mosques in the city. A volunteer of the organisation told the newspaper after two such temples had been cleaned, in Kotturpuram and Saidapet. “We find Hindus are unable to worship at temples in some areas because they have been severely affected owing to floods. So, we cleaned the mosques and temples and the streets badly damaged in the two areas. In the coming week, we will do similar work in other areas of the city,” Peer Mohammed, postgraduate in engineering and a student wing secretary (social service of the organisation.[1]

Same day same month same year, the portal www.rediff.com reported that  traumatised but re-born after the floods nearly took their lives – Chitra and Mohan from Urapakkam named their newborn daughter Yunus after the MBA graduate who rescued the pregnant woman from neck-deep waters and moved her to a hospital.[2]

Just the month before, in November 2015, the Times of India reported on November 26 from Bareilly that Muslims pooled in Rs 50,000 to secure the release of the Hindu prisoners languishing for want of money in the district jail. They had been lodged in jail on charges of petty crime like ticketless travel. Unable to cough up the fine to make reparation for their misdeeds, the men were serving an additional sentence. Once the money was paid, the 15 men walked out free birds. [3]One of the inmates, Nand Kishore, had served out the period of his sentence for ticketless travel, but was not released as he failed to pay a Rs1,000-fine. But as he left the jail premises and strode towards home, Haji Yasin Qureshi and his friends, all Muslims, hugged him and walked along. Among the others to taste freedom were Ajay Kumar, Kishan Sagar, Pappu and Tilak. All of them were warmly embraced as they emerged from the jail, all deeply moved by the gesture of their benefactors who had come to their aid in a time of crisis.

Same month, November 2015, far south a wonderful example of lived toleration that signifies the Indian brand of secularism and respect for diversity. For Indians, secularism and a deep respect for plurality is ingrained; unlike many would like to propagate, it is not just a borrowed western construct:  Kunhelu, , a Hindu martyr was buried at the Valiyangadi Juma Masjid here centuries ago and this mosque –unaffected by the waves of exclusivism --continues the tradition of offering special prayers at his grave even today. [4] Locally revered as a legendary figure, Kunhelu is believed to have lost his life, along with 43 Muslim warriors, in a battle against the erstwhile Zamorin king of Kozhikode 290 years ago.  As per historical evidence and the Malappuram Kissa Mala, written by poet Moyinkutty Vaidyar, 44 `shuhadakkal' (martyrs) died fighting the army led by Varakkal Para Nambi, the minister of Zamorin over the issue of tax collection.  Kunhelu, who belonged to the Thattan (goldsmith) community, joined his Muslim friends under the leadership of Ali Marakkar. Muslims were forced to flee the region when the mosque was set ablaze by Nambi. Later, the issue was resolved and Nambi himself took the effort of rebuilding the mosque and brought many Muslim families back to Malappuram. The mosque evolved over the years to become a major religious centre in Malappuram Town.

Descendants of Kunhelu are invited during prayer meetings and the annual aadu nercha (goat sacrifice) held in memory of the martyrs at the mosque. “The family members are invited to prayer meetings. During the nercha, held in the Arabic month of Sha'ban, cheerni (sweet) is prepared and distributed among the public,” said Manukuttan, a teacher, who belongs to the family of Kunhelu. Sayed Muthukkoya Thangal, qazi of Malappuram, said the tradition showcased the unity among Hindus and Muslims.

Then just the month before, in October 2015, some Hindu women thought little of using the auspicious precincts of the revered Ganapati temple for the equally pure task of allowing a Muslim woman to give birth to her child. Mid-day first reported [5] that the woman concerned was forced out of her car after the taxi driver panicked that she was going to give birth in his car. When the driver ejected them from their car, they were helped by some women who were sitting near a Ganpati temple. The women created a temporary delivery room with the help of sarees and bed-sheets, and helped with the delivery. The couple went to the hospital after the delivery and the doctors said there were no signs of complications. The happy couple told the newspaper that they were going to name the baby Ganesh.

Byculla and Kurla, both locations of central southern and central western Mumbai respectively set an example with Hindus and Muslims negotiating spaces for each other’s observances with respect in October 2015. Asian Age [6] reported that in Kurla, residents of Kurla-Kajupada had decided not to play dandiya in 2015 so that Muslims in the area can organise Muharram sermons for 10 days and in a beautiful gesture of reciprocation  Muslims also decided to refrain from waaz (the Muharram discourse) on Dussehra Day.[7] Similarly a local social group at Hans Road in Byculla (west), which had been organising  10-day discourse(s) during Muharram since 1984, postponed its programme till the conclusion of Navratri so that a dandiya programme was not disturbed.

One more story of New Year cheer from Dharavi that was scarred by brute violence in the December of 1992. The local Mohalla Committee has worked tirelessly to foster harmony since. Remember the poster designed by Waqar Khan “Hum Sub Ek Hai” that was finally adopted by the Mumbai Police? In Dharavi,  Deepak Kale has allowed a Mosque inside his shop—an area of 2,500 square feet in the ground floor of –believe it or not –the Bajrang Bali housing society.

And there’s much more. This was from just the past three months of the past year. Sughra Bi from Madhya Pradesh’s Mandsaur district took the initiative to collect money to restore back to glory the Durga Maa temple that was in ruins, reported NDTV. "Durga Maa is considered as the mother of the world. That is why I decided to rebuild this temple," she is quoted to have said. [8] And in Tripura Muslims joyously participate in Durga Puja with Basiruddin Bhuyan elected as President of the Puja Committee in the Sonamura sub-division of Sipahijala district. [9]

And despite the hate-driven politics of the Sangh Parivar the 50 year old tradition of Muslim participation in Ramleela near Ayodhya has not stopped, reports The Hindutan Times.[10]In Mumtaz Nagar village, barely eight kilometres from Ayodhya — the land of Lord Ram — the Ramleela is unique. The play here is organised by Muslims. Majid Ali, a villager, is a busy man every year around. Ramleela 2015 was the 51st year of the Ramleela. The president of Ramleela Ramayana Samiti, Ali says: “The trend was started by our ancestors 50 years ago to ensure celebrations during Hindu festivals since the village had mostly Muslims. They started it to spread communal harmony and that’s what we try to do till now.” While the protagonists Ram, Sita and Lakshman are played by Hindus, Muslims happily portray other roles. “We respect all religions and select Hindus for the lead roles. This is because there are daily prayers before these characters and people touch their feet and perform aarti. But for all other roles, including that of Jamvant, Jatayu, Meghnath etc, people of the minority community are roped in and they do their job with perfection.”

Visit  https://peacemap.in/. We are a small and committed team that have re-launched in a vibrant format despite deliberately unleashed state vendetta to thwart our actions towards preserving India’s Constitutional ethos. Hence many sections are not completely updated and the data collection is, at the moment, media-driven (that is primary data collected from the newspapers). We hope to update this soon.

Within months we however wish to ensure that this data is actually sourced from primary sources, FIR and Complaints registered as also from a reliable band of Peace Volunteers in every Village, City and District. We invite our readers to be part of this effort. Email inquiries at.wesabrang@gmail.com

So presently if you click on https://peacemap.in/ you will find certain categories available. The sections on Caste and Gendered Violence and Peacemakers need to be updated (which means the final figures, media-driven as they are, will go higher). But even from a cursory (incomplete) look we can see the following; that between June 2014 and November 2015 we have recordings of not just the conflict but the specific causes and build up in different regions of the country.