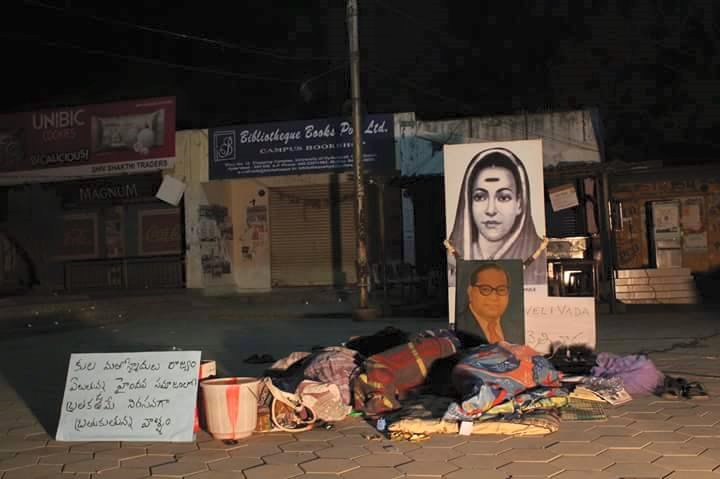 Protest against the expulsion of Dalit research scholars

In a strong and creative protest, 50 students of University of Hyderabad(UoH) have been sleeping in the open ground to protest expulsion of five Dalit research scholars from the varsity’s hostel. The scholars have been sleeping out in the open at Hyderabad University’s shopping complex ground for nine consecutive days after they got expelled demanding that the UoH roll back the expulsion. The research scholars protest is backed by 10 student outfits on campus. The five students were expelled following un-Constitutional pressures exercised by the Hindutvawaadi Akhil Bharatiya Vidyarthi Parishad (ABVP) on the university administration.

It is a battle for freedom of expression. The Ambedkar Students Association (ASA) decided to screen Muzaffarnagar Baqi Hai on campus. The ABVP tried, unsuccessfully, to disrupt the screening. The saffron outfit began abusing students affiliated to the ASA on facebook and social media. Widespread protests by all students at this hate-mongering  forced the student to submit a written apology. However, local BJP and RSS supporters joined with the ABVP to force the VC to expel the ASA leaders on fabricated charges, although, a committee appointed by the VC had already given a favourable report finding no fault ASA students.

It has been clear that this entire issue was backed by political bigwigs at the Centre. A ‘letter’ had been sent by none less than  Bandaru Dattatreya , Secunderabad BJP MP and Minister of State for Labour and Employment, to the Ministry of Human Resources Development (MHRD) dubbing ASA “casteist, extremist and anti-national”. The communication demanded that the “dynamic leadership” of Smriti Irani, Minister of Human Resources and Development, bring about a “change for the better” in the institution. The letter can be read here. 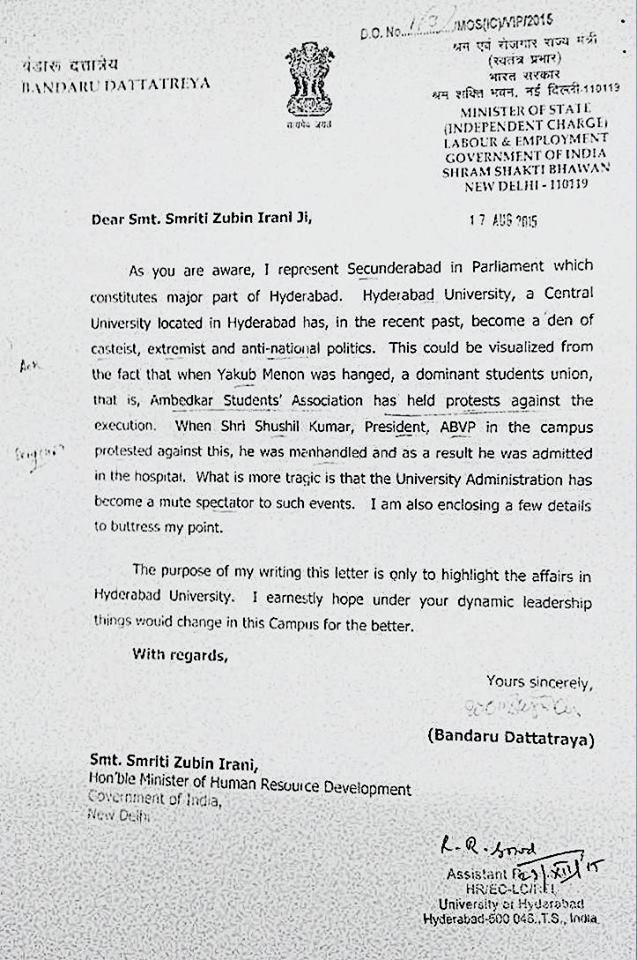 The persuasion in this communication appears to have worked. The Vice Chancellor buckled under pressure and without looking into the background of the case or even hearing the students, expelled them.

This expulsion from the hostel of five Dalit student leaders of the Ambedkar Students Association(ASA) at the Hyderabad Central University is illustrative of the manner in which politico-ideological considerations and governmental authority are being abused with impunity to suppress all points of view other than the self professed ‘nationalism’ of the Hindutva  brigade. Another reason for the expulsion was the claim that they had opposed the death sentence to Yakub Memon!

Several students groups from the university have launched a legal battle. They have challenged the University of Hyderabad (UoH)’s decision to expel five Dalit scholars for allegedly attacking a student and a member of Akhil Bharatiya Vidyarthi Parishad (ABVP).  Seeking justice, the suspended students, on December 18, filed a writ petition in the Hyderabad High Court. This development has come in the wake of university issuing orders, banning the Dalit scholars from hostels, barring their entry into common places in groups, administration building and disallowing their participation in students union elections as a punishment.

The unique sleep out protest of the research scholars is backed by 10 student outfits on campus. Student supporters have been gathering singing slogans and participating every night for the past nine nights.