Blood on my hands: Confessions of staged Encounters

Every once in a while along comes a book which will completely turn your world upside down. For an ordinary Indian, this is one such book. The author, a long time reporter, gives a vivid and horrifying account of the fake encounter ‘industry’ which has cropped in the army in all the conflict areas of India, specially in North East. For promotion, for money, for bosses, for smuggling, for awards….Indian citizens (and poor immigrants) are being murdered most ingloriously by members of one of the most revered institutions in India: The Army!

For most Indians this is the most horrible shock, including for people like me who come from army families. We grew up with images of duty, sacrifice, patriotism…not murder. Most of the book is a confessional: an anonymous army officer who confesses the army’s ‘illegal business’ to the journalist: cases, units, dates, motives. Many books have been written on fake encounters, but its an ode to Bhattacharjee’s excellent writing that the reader suffers along with the Rehman and the Anant n all; shivering with fear at the poor sods who, like petrified animals, offer no resistance even as they know they are going to be slaughtered. It’s the stuff of which nightmares are made. That the author is a superb journalist is evident from the fact that he doesnt adorn the narrative with too many frills or wordsmittery. He just lets the horrifying cases speak for themselves.
The army officer giving his blood chilling account dispassionately over tasty snacks and home made dinner is a fascinating figure. He doesnt seem to have many moral imperatives; so why is he telling a journalist all these horrific details? — Guilt? revenge? …Its never quite clear. His tone suggests its just another kind of office politics & systemic pressure…everyone has blood on their hands. He does say that he doesn’t like pulling the trigger himself and that its the weak men who make the best volunteer killers..they have a point to prove.

Perhaps to protect his identity,he is never fleshed out much as a person. But one can’t help but wish that the author had at least grabbed him by his lapels and shouted ‘u b***, u ppl have created this mess; uve ruined the honour of the army…tell us how to clean this up!!” But alas, like the good journalist he is, the author suggests no solutions. He’s just the proverbial mirror to our society…and what a monstrous image of Indian state the book shows. 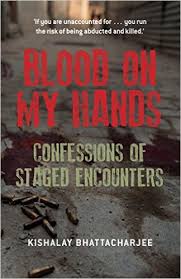